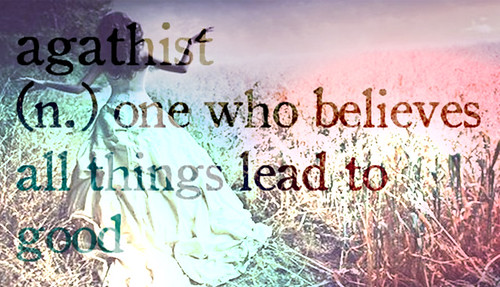 agathist /A-gə-thist/. noun. One who believes things naturally tend toward the good. A systemic optimist. An adherent to the doctrine of agathism, a doctrine of optimism and a life devoted to the good. From Greek agath (good).

“From the agathist point of view, religion at its best is self-conscious, disciplined pursuit of knowledge of the good plus devotion to it. Such a life may or may not involve belief in a personal, transcendent God.” (Richard E. Creel)

“The existence of evil compels Dr. Miller to substitute the moderate title of ‘Agathist’ for that of ‘Optimist.’ Pawns, therefore, must fall, and bishops; but he will in part indemnify us by pointing out the reason.” (The Edinburgh Review)

Doctor Kearney, who formerly, with so much reputation, delivered lectures in this place on the history of Rome, observed to me once, that he was not an optimist, but an “agathist”; that he believed that everything tended to good, but did not think himself competent to determine what was absolutely thebest. The distinction is important, and seems to be fatal to the system of Optimism. (George Miller)

If the existence of pain and evil render it difficult for a reflecting man to be an optimist, there is no reason why he should not, at all events, be an agathist. It is an observation of Dr. Johnson, that as the greatest liar tells more truth than falsehood, so may it be said of the worst man, that he does more good than evil. (Horace Smnith)

zoilus /ZOH-i-ləs/. noun. A bitter, envious, even malignant critic given to unjust faultfinding. Coined after the Ancient Greek critic of the same name who was famous for his criticism of Homer, leading to his nickname Homeromastix (scourge of Homer) and his place in the proverb that “every poet has his Zoilus.” None of Zoilus’s writing has survived.

“I am unable to prevent my own Zoilus from imitating a bright and saucy schoolboy, but really he should not tell me how to spell the plural of ‘automaton’ which has two endings, both correct. And what business does he have to rebuke me for preferring Theocritus to Virgil and to insinuate that I have read neither?” (Vladimir Nabokov)

“As Homer had a Zoilus, so Mr. Rowe had sometimes his; for there were not wanting malevolent people, and pretenders to poetry too, that would now and then bark at his best performances…” (Samuel Johnson)

“Nay, should great Homer lift his awful head,
Zoilus again would start up from the dead.

Envy will Merit as its shade pursue,
But like a shadow proves the substance true…”
(Alexander Pope)

“Zoilus (a majestic rascal,
whom only lust of gain can stir)
and Publicus, litterateur
(a nervous leaseholder of glory),
cower before me in dismay”
(Vladimir Nabokov)

“You Zoiluses, jealous and envious, will die of fear. Go and hang yourselves and choose a tree for yourself to do it on: you will never lack a rope…” (Rabelais)

“While he ate, which he did with the finical niceness of an aged and dyspeptic gourmet on the umpteenth course of an imperial banquet, he would glance up at me now and then with a speculative and, so it seemed, drily amused expression.” (John Banville)

“Time was when I was thought entitled to respect. But now, debauched by this Frenchified rascal, they call me rude, surly, a tyrant! It is true that I cannot talk in finical phrases, flatter people with hypocritical praise, or suppress the real feelings of my mind. The scoundrel knows his pitiful advantages, and insults me upon them without ceasing.” (William Godwin)

“Now, the wry Rosenbloom is dead
And his finical carriers tread”
(Wallace Stevens)

“Be it mine once more the maunderings to trace
Of the expounders’ self-directed race—
Their wire-drawn fancies, finically fine,
Of diligent vacuity the sign.”
(Ambrose Bierce)

“The knowledge enshrined here is most luminous; but the extravagance is wearying, an outrage to God and man, especially when set amidst so pious a town, where the most finical youth buys his fopperies in brown and gray…” (M.T. Anderson)

“Scrupulous to the last, finical to a fault, that’s Malone, all over.” (Samuel Beckett)

“Whereas, some merchant ships crossing each other’s wake in the mid-Atlantic, will oftentimes pass on without so much as a single word of recognition, mutually cutting each other on the high seas, like a brace of dandies in Broadway; and all the time indulging, perhaps, in finical criticism upon each other’s rig.” (Herman Melville)

“Now, mark you, I was devilish sharp set. I was in no mood to quibble about trifles: I was not, shall we say, in a finical mood.” (Philip Larkin)

“For about two-thirds of the poem the restraining, self-abnegating, completely attentive manners of the writing keep us alive to the surfaces of a world: the note is colloquial if tending towards the finical, the scenery is chaste, beloved and ancestral.” (Seamus Heaney) 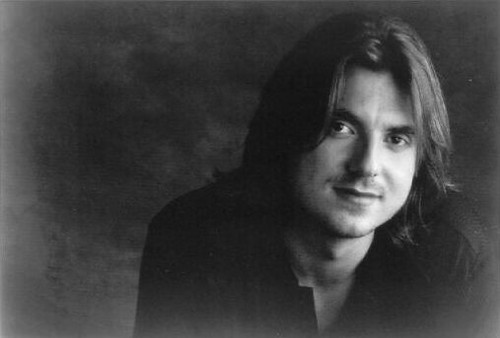 paraprosdokian /pair-ə-prohs-DOH-kee-ən/ noun. A figure of speech featuring a surprise turn or ending. A common rhetorical device in comedy exemplified by the one-liners of Steven Wright, Mitch Hedberg and Woody Allen. From Ancient Greek pará (against) + prosdokía (expectation). Some examples of paraprodoskians:

“I haven’t slept for ten days…because that would be too long.” (Mitch Hedberg)

“If all the girls at Vassar were laid end-to-end…I wouldn’t be surprised.” (Dorothy Parker)

“There but for the grace of God—goes God.” (Winston Churchill)

“It’s not that I’m afraid to die, I just don’t want to be there when it happens.” (Woody Allen)

“If I could just say a few words…I’d be a better public speaker.” (Homer Simpson)

“The last thing I want to do is hurt you—but it’s still on the list.” (Steven Wright) 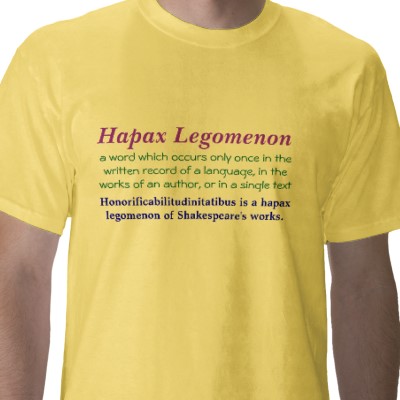 hapax legomenon /ha-PAKS lə-GAW-mə-nawn/. noun. A word that occurs only once in a text, oeuvre or a body of literature (aka a corpus). Often abbreviated as just hapax. Surprisingly, 40–60% of large collections of text are made of hapaxes. Read more: Wikipedia. See also: hapaxanthic (a plant that fruits and flowers only once). Borrowed from Greek hapax legomenon ([a thing] said only once).

“This is the Age of Complete Interconnection. No wires can hang loose; otherwise we all short-circuit. Yet, it is undeniable that life without individuality is not worth living. Every man must be a hapax legomenon…” (Philip Jose Farmer)

“The term for a word that only appears once in a text is hapax legomenon, which sounds like a character from an Asterix story, or a Scandinavian death metal band, and in this text appears only once.” (Alex Bellos)

“…where would their practice be or where the human race itself were the Pythagorean sesquipedalia of the panepistemion, however apically Volapucky, grunted and gromwelled, ichabod, habakuk, opanoff, uggamyg, hapaxle, gomenon, ppppfff, over country stiles, behind slated dwellinghouses, down blind lanes, or, when all fruit fails, under some sacking left on a coarse cart?” (James Joyce)

“…toad: I have followed Bottéro here. Other scholars have translated this hapax legomenon as ‘dwarf’, ‘mole,’ ‘spider’, or ‘scarecrow’.” (Stephen Mitchell)

“This reflects directly a period of experimentation (quite a lot of the relevant forms are hapax legomena, and we often find whole sets of formations with no apparent difference in meaning…)” (Geoffrey Horrocks)

“The old dictionary was ‘rather liberally sprinkled with hapax legomena,’ said Gove, referring to words that appeared but once in the history of the language. ‘Some of Shakespeare’s surcharged figures result in senses that never but for him would have been isolated for dictionary definition.’” (David Skinner)

“‘Yes, she does have something of that fougue,’ Andrei Antonovich muttered, not without pleasure, at the same time regretting terribly that this ignoramus should dare to express himself quite so freely about Yulia Mikhailovna…” (Fyodor Dostoevsky)

“Thus Sforza, cursed with a too fertile brain,
Lost by his wiles the power his wit did gain.
Henceforth their fougue must spend at lesser rate,
Than in its flames to wrap a nation’s fate.”
(John Dryden)

“The conscious agility, fougue, and precision which fill the performer become contagious and delight the spectator as well.” (George Santayana)

“About six weeks, however, after his mother’s death, Coryston’s natural fougue suggested to him that he was being trifled with.” (Mrs. Humphry Ward)

“On the extravagant Gothic fougue and fury of our native stage, characterised by its bad artistic form, and tumid, fantastic diction, classical influence of the right kind was purely salutary—granting, of course, the presence of original genius…” (Thomas Otway) 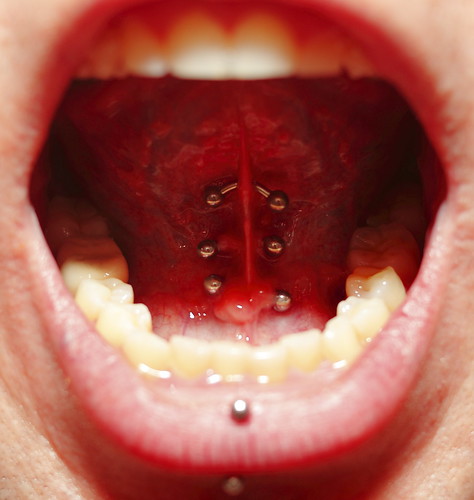 caruncle /kə-RUN-kəl/. noun. A fleshy outgrowth. A naked excrescence of tissue. For example: a turkey’s wattle or a person’s dewlap. From Latin caruncula (little piece of flesh), diminutive of caro (flesh).

“I was so scattered, I’m still not sure what to write: About my back aching from where I’d slept? my head still gauzed, Pharaohnically wrapped, from when I’d been woken up? about the cut on my neck? the slit from chin’s caruncle to neck like an against the grain shaving mishap, just healing?” (Joshua Cohen)

“Crooke states that the hymen is not a single membrane but is really made up of eight parts, ‘caruncles’ and membranes, and says that ‘all these particles together make the form of the cup of a little rose half blowne.'” (Hanne Blank)

“We had plenty of farmyard creatures, as, for example, rabbits, the most oval animal of all, if you know what I mean; and choleric turkeys with carbuncular caruncles…” (Vladimir Nabokov)

“His Eminence slapped him again: ‘Vainglorious hypocrite, don’t you know your soul looks like a turkey’s? It pecks its way close to the ground, shaped like a peg, it pecks and pegs, peck by peck it pegs away. Soul of a pecker! A pecker blinkered by its engorged snoods, your eyes can only see the ground to peck, and nothing more. You selfish gobbler! I see them well, I see the waddles and caruncles on your soul!'” (Giulio Tononi)