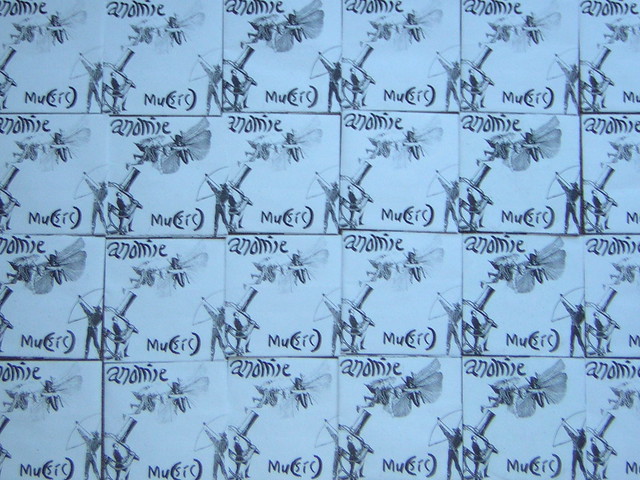 anomie · /ˈanəmi/ · /AN-ə-mee/. noun. Hopelesness because of, or characterized by, a breakdown in the social or moral standards in an individual or society. Isolation and anxiety caused by a lack of social control or regulation. An absence of accepted social values. A borrowing, with French spelling, of anomy (lawlessness, violation of divine law), from Greek anomos (without law). Not to be confused with anomia, a kind of aphasia rendering one unable to recognize everyday objects.

“She [Pamela] operated by a sort of inverted anomie; by which I mean that although she had rules, and plenty of them, their basis was the ever-shifting ground of what Pamela happened to find pleasing at the time…” (Rachel Cusk)

“No sleep for him tonight, and no more secrets, either, not at this unholy intersection of anomie and big-time news.” (Charles D’Ambrosio)

“My travel pass had expired, and it was symptomatic of my general feeling of Weltschmerz, of anomie, that I hadn’t even bothered to renew it…” (Gail Honeyman)

“He was effectively underscoring to hipsters that he wasn’t one of them. Infinite Jest wasn’t just an assertion of anomie, the way grunge was. It was also supposed to be an answer to despair…” (D. T. Max)

“It was as if the collective consciousness of the hive – if such an entity can be posited – had given in to a form of apian anomie.” (Will Self)

“…we’d much prefer to dwell once more in regions where someone at least tries to bring about some kind of order, a decent human order, than in the chaos of bloody dictatorships or the ominous anomie of unstable wastelands.” (Adam Zagajewski)