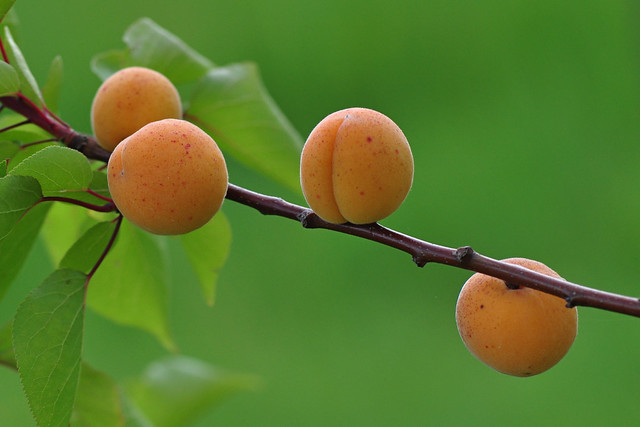 apricot · /AY-pri-kot/ · /ˈeɪprɪˌkɒt/. noun. Formerly apricock or abrecock. The stone fruit of the Himalayan tree Prunus armeniaca, of the rose family. The tree itself. The color of the fruit. ¶ From Catalan abercoc and Portuguese albricoque, from Arabic al-birquq, through Byzantine Greek berikokkia, from Latin praecoquum (early-ripening fruit) … from which we also get the word precocious. ¶ The original Proto-Indo-European root pekw- is the source many other words including: kitchen, pumpkin, biscuit, charcuterie, ricotta, kiln and (dys)peptic.

“He was baffled to know that apricot trees existed in, of all places, our orchard. On late afternoons, when there was nothing to do in the house, Mafalda would ask him to climb a ladder with a basket and pick those fruits that were almost blushing with shame, she said. He would joke in Italian, pick one out, and ask, Is this one blushing with shame? No, she would say, this one is too young still, youth has no shame, shame comes with age.” (André Aciman)

“That evening, as I watched the sunset’s pinwheels of apricot and mauve slowly explode into red ribbons, I thought: The sensory misers will inherit the earth, but first they will make it not worth living on.” (Diane Ackerman)