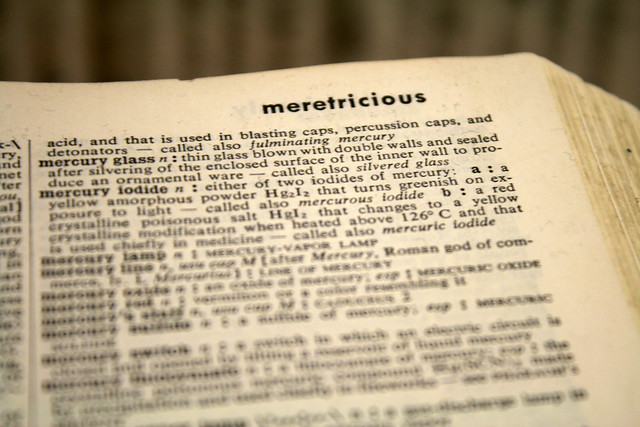 meretricious · /ˌmɛrɪˈtrɪʃəs/ · /MAIR-ih-TRISH-əs/. adjective and noun. Of, related to, or befitting a prostitute. Gaudy, flashy, superficially attractive. Insincere. Etymonline notes the lovely, early definition, “pertaining to harlots.” ¶ From merētrix (prostitute), from merēre (to earn money). From the PIE root (s)mer- (to get a share of something), from which we also derive words such as demerit, polymer, and turmeric. ¶ I just like it because it’s one of those words that seems it should mean its opposite. Is there a word for that?

“…the depraved custom of change, and the delight in meretricious embracements (where sin is turned into art), maketh marriage a dull thing…” (Francis Bacon)

“Why can’t you believe in me? I know, it’s my bombastic voice that has a meretricious ring in it? My meridional manners?” (Mina Loy)

“…there are vindications to be had as well, far sweeter than anything contained in the meretricious illusion of good notices or ‘a good press’” (Christopher Hitchens)

“They may be beautiful (we have both written some that were) but they are meretricious.” (Jack Spicer)