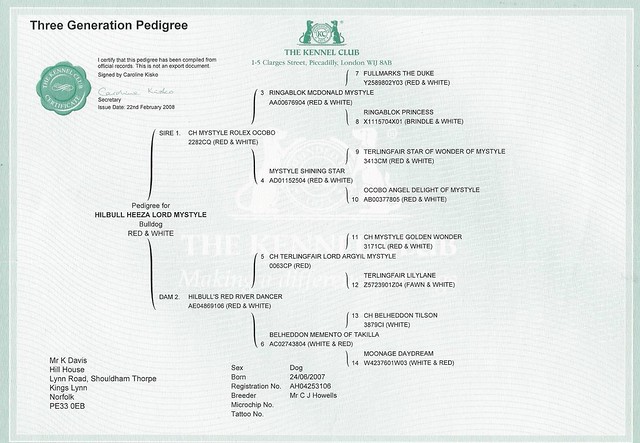 pedigree /PED-i-gree/. noun. A line of descent, most often of a purebred animal, or the document describing it. A genealogical table. A derivation or background. From Old French pie de grue (literally “crane’s foot,” referring to the appearance of spreading lines in a genealogical chart).

“There is no tracing the connection of ancient nations, but by language; and therefore I am always sorry when any language is lost, because languages are the pedigree of nations.” (Samuel Johnson)

“At the time she had sneered at his Otherisms; she knew the grandees of her creed by name, had its hierarchies graven upon her heart. That particularly nasty strain of belief that was mysticism, to which she assumed he was referring when he spoke of the wasted lifetimes of the agnostic world, had nothing whatsoever to do with her own high-pedigree catechism; and appeared to her to consist mainly of the desire to explain phenomena such as spectral activity, telepathy and alien spacecraft.” (Rachel Cusk)

The pedigree of honey
Does not concern the bee;
A clover, any time, to him
Is aristocracy.
(Emily Dickinson)