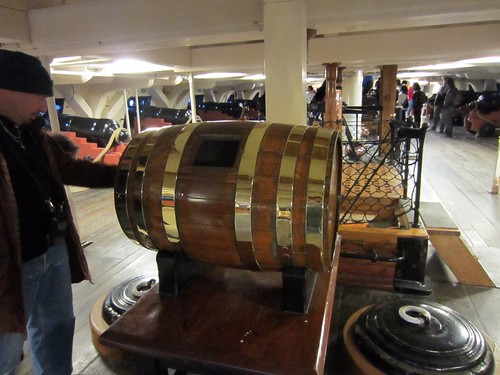 scuttlebutt (scuttle-butt) /sku-təl-but/. noun. Rumor; gossip. In nautical terms, a water cask or a drinking fountain. From scuttle (a hole/opening in a ship’s deck) + butt (barrel). Like furphy, the name of the object became slang for the idle talk that commonly took place around it.

“The scuttlebutt (which actually is scuttlebutt and not gossip, because we’re on a ship) is that the ship is being taken back to Bermuda…” (Tina Fey)

“He feels bad for having designed the see-through cow. Of late he’s been kicking the diorama apart, and the scuttlebutt is he’s one building away from dismissal. I say good morning and he sits down disconsolately on Mount Hood.” (George Saunders)

“He asked whether I was going to breakfast. The scuttlebutt on breakfast was sausage-analog and OJ with palpable pulp, he said.” (David Foster Wallace)

“Rick Raymond taps the microphone and the men stir from their scuttlebutt and applaud. From more than one man’s oily lips issues that whistle one only hears in crowds.” (Colson Whitehead)

“We arrived home to a very special heroes’ welcome: the town had been starving outright for good scuttlebutt. So hip hip hooray, welcome home the pitiful Prices!” (Barbara Kingsolver)

“She was not as easy to place as Astrid or Jackie; she was a newborn, after all, and, well, the scuttlebutt around the family has it that as she was so dark no one on Abelard’s side of the family would take her.” (Junot Diaz)