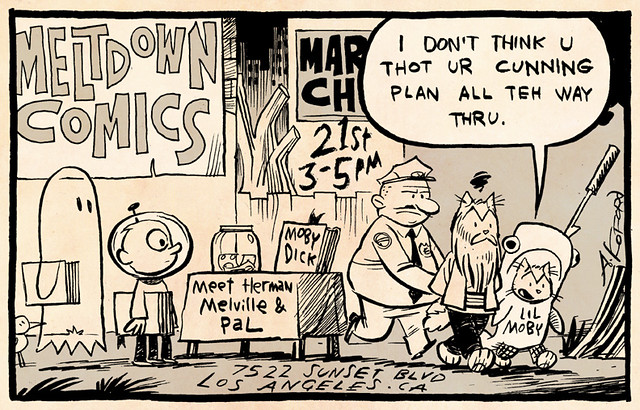 “She was at her triturations. Spooning to death in a salver a speckled slug, marked like an ocelot, viscous and sticky. A whitish paste. Crooning a low threnody to her pawky trade.” (Cormac McCarthy)

“Though he is not known as a satirist, his Blood Meridian, about a ruthless band of bounty hunters looking for Indian scalps in Texas in the 1850s, can be read at least in part as a bloody pasquinade on the heroic literature of westward expansion. A pawky gallows humor is a reliable if underappreciated element in much of McCarthy’s work…” (Michael Chabon, from Maps and Legends)

“In this milieu, you suddenly see the urgent meaning of that phrase about everybody needing a good laugh. The Algonquin Round Table could never have been so remorselessly pawky.” (Martin Amis)

“He went on in his pawky way trying to make clear to her his mystical faith in these men who went ragged and hungry because they had chosen once for all between what he called in all seriousness their souls, and this world.” (Katherine Anne Porter)

“It was in such situations that Neil had most admired Munro’s tact. He had often been slyly amused to see with what a pawky and yet tender cunning he appeased her feminine tantrums.” (W. Somerset Maugham, from “Neil MacAdam”)

“At the back of the auditorium a man walks out. Professor McGovern, uniquely, in Toby’s experience of her, seems completely frozen, uncertain as to what to do next. J J is trying to appear amused as if in the hope that this will yet prove to be a jest, some pawky piece of academic humour.” (Julian Barnes, from Cannonbridge)

“If you call it cunning,” I said, “to play one member of your staff against another. For my part, I would call it knavery.”
“Good generalship,” he said.
“Gerrymandering,” I answered.
“A ruse de guerre,” he countered.
“Pawky politics,” I argued.
(Daphne Du Maurier, from The King’s General) 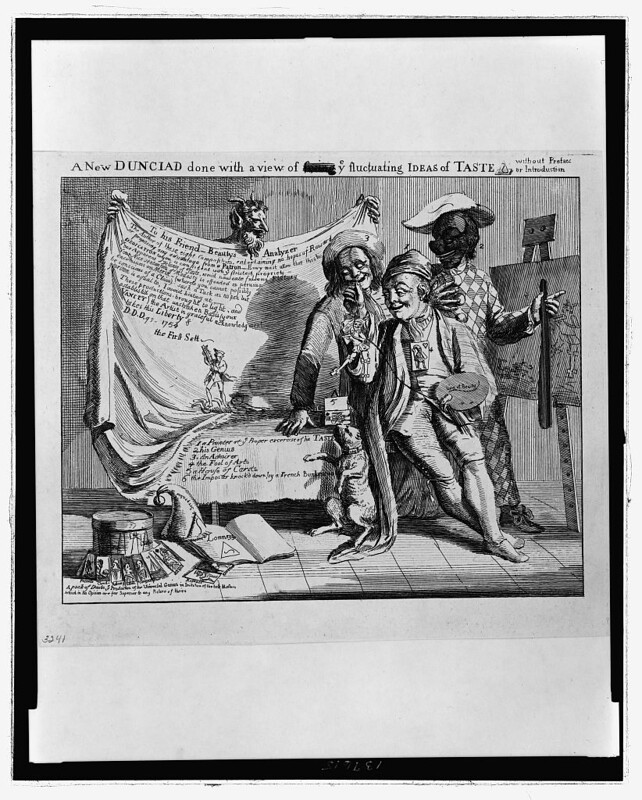 scaramouch(e) /SKAIR-ə-moosh/. noun. A cowardly, foolish braggart. As a proper name, a stock character in Italian farce who is routinely beset by the Harlequin. From Italian scaramuccia (skirmish).

“…here he wears the Jack-Boots, there the Small-Sword; is here an Enthusiast, there a Buffoon; on this Side he acts the Mountebank, on that Side the Merry-Andrew; nothing comes amiss to him, from the Great Mogul, to the Scaramouch; the Devil is in them more or less…” (Daniel Defoe)

“…if I may lean on Perian’s punning style, The Malacia Tapestry could unfussily be retitled Tom Cojones and left at that. De Chirolo, a raffish scaramouche, is a terrible ‘one’ for the girls…” (Martin Amis)

“If you strip Peter, you will see a fellow
Scorched by Hell’s hyperequatorial climate
Into a kind of a sulphureous yellow:
A lean mark, hardly fit to fling a rhyme at;
In shape a Scaramouch, in hue Othello.”
(Percy Bysshe Shelley)

“They revelled last night in ‘Don Juan,’ whom we left in hell at half-past eleven. We had scaramouch and a ghost, and were delighted. I speak of them; my delight was very tranquil, and the rest of us were sober-minded.” (Jane Austen)

Keith wore a brown shirt of moire silk with raised stripes (its texture reminded Guy of pork crackling), hipster cream flares, and a new pair of coarse-furred ferret-like loafers (with a hint of the scaramouch or the harem-creeper in their curled tips). (Martin Amis, from London Fields) 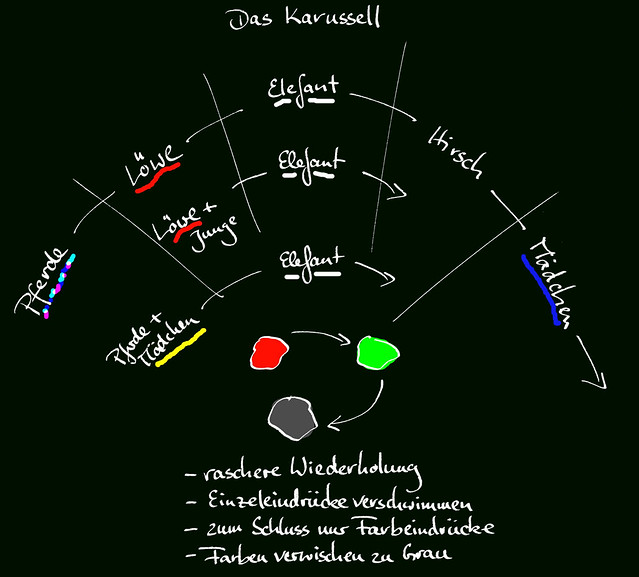 polysyndeton /POL-ee-SIN-də-tahn/. noun. The use of several conjunctions—usually repeated—in succession. AKA “overly many conjunctions.” A very common biblical device and one which often adds gravity, mystery, breathlessness, or expansiveness to a phrase. From Greek polu (poly) + sundetos (bound together).

“Oh, my piglets, we are the origins of war—not history’s forces, nor the times, nor justice, nor the lack of it, nor causes, nor religions, nor ideas, nor kinds of government, nor any other thing. We are the killers. We breed wars.” (James Goldman)

“Whatever this is that I am, it is a little flesh and breath and the ruling part.” (Marcus Aurelius)

“And the basement kitchen in nipping February, with napkins on the line slung across from door to chockablock corner, and a bicycle by the larder very much down at wheels, and hats and toy engines and bottles and spanners on the broken rocking chair, and billowing papers and half-finished crosswords stacked on the radio always turned full tilt, and the fire smoking, and onions peeling, and chips always spitting on the stove, and small men in their overcoats talking of self-discipline and the ascetic life until the air grew woodbine-blue and the clock choked and the traffic died” (Dylan Thomas)

“Unless hours were cups of sack and minutes
capons and clocks the tongues of bawds and dials the
signs of leaping-houses and the blessed sun himself
a fair hot wench in flame-coloured taffeta, I see no
reason why thou shouldst be so superfluous to demand
the time of the day.” (William Shakespeare)

“It came boring out of the east like some ribald satellite of the coming sun howling and bellowing in the distance and the long light of the headlamp running through the tangled mesquite brakes and creating out of the night the endless fenceline down the dead straight right of way and sucking it back again wire and post mile on mile into the darkness after where the boilersmoke disbanded slowly along the faint new horizon and the sound came lagging and he stood still holding his hat in his hands in the passing ground-shudder watching it till it was gone.” (Cormac McCarthy)

curple /KƏR-pəl/. noun. The rump; the buttocks. Particularly an equine’s hind-quarters, AKA a horse’s ass. A corruption of crupper, which could refer to either the rump of a horse or a strap that passed under the tail to secure a saddle. From the French croupière, from medieval Latin and Italian groppa.

“I’m afraid that John Durie has cracked his curple, at least his mouth is closed.” (James Carmichael)

grawlix /GRAW-lix/. noun. A series of typographic symbols used in place of an offensive word or phrase. Coined by Mort Walker in the satirical article “Let’s Get Down to Grawlixes” (which I can’t find online, thanks for $%@&#! nothing, Google) the term took off and has become a standard part of the lexicon of comics. As you can see for yourself, the grawlix originated as a mix of typographic and other symbols. See also: jarns, quimps, and nittles.

Sadly, most of Walker’s other awesome comic-related coinages failed the popularity test, including plewds (the flying sweat droplets that indicate hard work or stress), briffits (the clouds of dust that indicate the swift departure of a character), and squeans (the starbursts, circles and spirals that indicate dizziness or drunkenness).

mimp /MIMP/. noun or verb. An affected pursing of the lips. An overly prim look. To act in an overly precise, fussy manner. Origin uncertain: the OED states that it may derive from mim, which itself is though perhaps, to be “imitative of the action of pursing up the mouth.”

“She took up her book and began so prettily, and so sensibly, where another miss would have mimp’d.” (Hester Lynch Thrale)

“Paphian Mimp, a certain plie of the lips, considered needful for ‘the highly genteel.’ Lady Emily told Miss Alscrip, ‘the heiress,’ that it was acquired by placing one’s self before a looking-glass, and repeating continually the words ‘nimini pimini;’ ‘when the lips cannot fail to take the right plie.'” (John Burgoyne)

“When Luxury has lick’d up all thy pelf,
Curs’d by thy neighbours, thy trustees, thyself;
To friends, to fortune, to mankind a shame,
Think how posterity will treat thy name;”
(Alexander Pope)

“He still has the dangerous vision that guides his life—the vision of the Land of Pelf, the long green, the crisp bills falling gently from the money trees like dead leaves” (Harlan Ellison)

“The Gulag Tour, so the purser tells me, never quite caught on…Moscow is impressive—grimly fantastic in its pelf. And Petersburg, too, no doubt, after its billion-dollar birthday: a tercentenary for the slave-built city ‘stolen from the sea.’ It’s everywhere else that is now below the waterline.” (Martin Amis)

“Machines is their cry, their chimera, their panacea. Laboursaving apparatuses, supplanters, bugbears, manufactured monsters for mutual murder, hideous hobgoblins produced by a horde of capitalistic lusts upon our prostituted labour. The poor man starves while they are grassing their royal mountain stags or shooting peasants and phartridges in their purblind pomp of pelf and power.” (James Joyce)