falcate /FOWL-kayt/. adjective. Sickle shaped. Hooked. Curved to a point. From Latin falcem (sickle) + -ate (resembling). Not to be confused with defalcate (to embezzle, sadly not pronounced to rhyme with defecate).
END_OF_DOCUMENT_TOKEN_TO_BE_REPLACED

frammis /FRAM-əs/. noun. A generic term for a thing that someone can’t name, similar to thingamabob or gizmo. A common invented surname in comics and invented company name in technical writing. More generally, nonsense or jargon, commotion or confusion. Origin unknown, perhaps derived from a family name.

“It [the comic strip ‘Silly Milly’] has its pet vocabulary—all names are Frammis, laughter is Yuk Yuk, and the language of animals is Coo.” (M. Farber)

“I could not write most science-fiction films, especially the kind where there is all that lunatic ‘Captain, the frammis on the right engine is flummaging’–type dialogue.” (William Goldman)

“We didn’t have a flangella voltometer with us. Very important during electrical work, otherwise you can fry the frammistat.” (Tom Piccirilli)

“The kook really meant it. He wanted to go find that uppity creepy cemetery where Ginny’s blue-blood parents had stuck her body, and blow trumpet for the dead. It was all at once laughable and pitiable and creepy. Like a double-talker giving you the business with the frammis on the fortestan, and you standing there wondering what the hell is happening.” (Harlan Ellison)

“In this little frammis, one of the oldest, you were persuaded to leave your clothes on the bureau… You see, honey? No one can touch ’em.” (Jim Thompson) 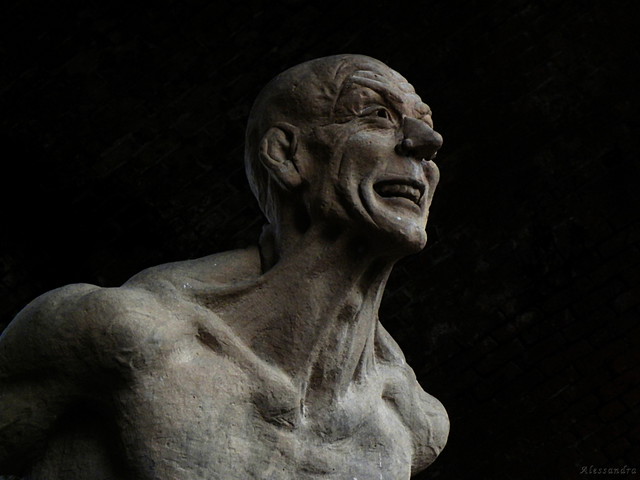 fleer /fleer/. verb or noun. To grin or grimace; to sneer or jeer; to jibe…or the look of one doing so. A mocking speech. Unknown origin, possibly related to Norwegian and Swedish flira, Danish flire (to grin, to laugh inappropriately).

“What, dares the slave
Come hither, cover’d with an antic face,
To fleer and scorn at our solemnity?”
(William Shakespeare)

“The gas-lights hissed with a faint, malicious susurration, and except for their infinitesimal mechanical vivacity, that jetted fleeringly from obscenely open small slits, all life was extinguished.” (Hermann Broch)

“Nat wore the look he got when he was listening to something amazing that was new to him. A fleer of analysis, like he was startled to learn that he could have missed this before, given that he knew everything about anything worth knowing.” (Michael Chabon)

“My jaw muscles tightened and I think my lips fleered back like a wolf’s at the kill.” (John Steinbeck)

“I have always seen her critical, scornful and fleering; but now it is with genuine ill nature that she tears those she calls her friends to pieces.” (Simone De Beauvoir)

“As I went up by Ovillers
In mud and water cold to the knee,
There went three jeering, fleering spectres,
That walked abreast and talked of me.”
(Ivor Gurney) 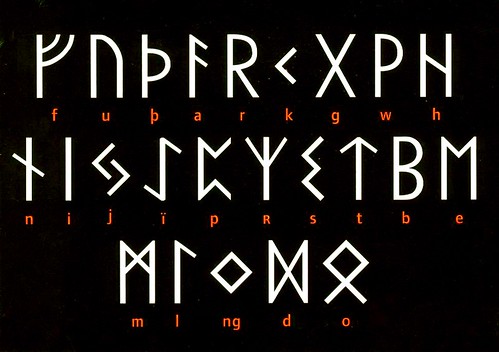 futhark (futhorc, futhork) /FOO-thork/. noun. The runic (ancient Scandinavian) alphabet, named after the initial phonemes of the first six runes: F, U, Th, A, R and K. The futhorc is the name of the Anglo-Saxon variant, representing sound changes in Old English for the same six letters.

“The runic alphabets are made up of beautiful, angular letters, each of which has a name, referring to an object, and a sound based on the initial letter of that name. If you were reciting, by name of object, one of the oldest forms of the runic alphabet, you would start off by saying: ‘fehu, uruz, thurisaz, ansuz, raidof, cen’ (meaning, in order: ‘money’ (or ‘cattle’), ‘ox’, ‘giant’ (or ‘monster’), ‘god’, ‘riding’ and ‘torch’). If you were reciting it by letter sound, you would say, ‘f’, ‘u’, ‘th’, ‘a’, ‘r’, ‘k’ — and those letters give the name to the oldest runic alphabet, ‘Elderfuthark’.” (Michael Rosen)

“Elder Futhark inscriptions were rare, with very few active literati, in relation to the total population, at any time, so that knowledge of the runes was probably an actual ‘secret’ throughout the Migration period.” (World Heritage Encyclopedia)

“Fairchild tipped the shot to his life and relaxed the craving. The man sitting next to him did the same for himself and waited with his hands in front him on the bar, the black penitentiary futharks on them blurred by trembling.” (Denis Johnson)

“In the Middle Ages, runes were used for divination and casting spells. As is shown in the Anglo-Saxon poem, the H´vam´l of the Elder Edda, it was a basic requirement of a rune master to know how to perform ‘the Sending’. Rune casting was fiercely condemned by the medieval Church as witchcraft and was poorly documented. So we have little knowledge about which futhark (or alphabet) was used by medieval rune readers in Britain or the interpretation they put upon the castings.” (Karen Maitland) 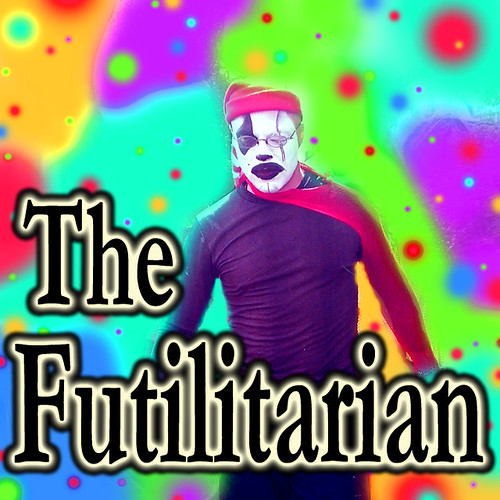 futilitarian /fyoo-til-ə-TAIR-ee-ən/. noun or adjective. One who is devoted to futile pursuits or believes in the futility of aspiration. A portmanteau of futile + utilitarian; coined by Robert Southey.

“If the Utilitarians would reason and write like you, they would no longer deserve to be called Futilitarians.” (Robert Southey)

“Born helpless, nude and unable to provide for himself, Lore Sjöberg eventually overcame these handicaps to become a futurist, a futurologist and a futilitarian.” (Lore Sjöberg)

Better an ‘Old Futilitarian of the dead American left’ than a surf-rider on the Wave of the Future.” (Irving Howe)

“They are infinite, I am thinking, all these hungry, grasping people chasing after the new and improved, the super and imperishable, and I stand alone against them—but that’s the kind of thinking that led me astray all those years ago. Better not to think. Better not to act. Just wave the futilitarian banner and bury your nose in a glass of sake.” (T.C. Boyle)

“…And I had been grieved by the loss of Star, troubled by Hugi’s futilitarianism. This was definitely not a good day.” (Roger Zelazny)

“They thus believe in a random, futilitarian universe where—if they’re existentialists—they might imagine that occasionally a heroic human being could assert some purpose above the froth of randomness, but in general, we’re all doomed to decay and destruction. That’s pretty much the philosophy, and it’s debauched a whole century of intellect.” (Robert Thomas Fertig)

“The death penalty, say these amiables and futilitarians, creates blood-thirstiness in the unthinking masses and defeats its own ends—is itself a cause of murder, not a check. These gentlemen are themselves of ‘the unthinking masses’—they do not know how to think.” (Ambrose Bierce)

“While he ate, which he did with the finical niceness of an aged and dyspeptic gourmet on the umpteenth course of an imperial banquet, he would glance up at me now and then with a speculative and, so it seemed, drily amused expression.” (John Banville)

“Time was when I was thought entitled to respect. But now, debauched by this Frenchified rascal, they call me rude, surly, a tyrant! It is true that I cannot talk in finical phrases, flatter people with hypocritical praise, or suppress the real feelings of my mind. The scoundrel knows his pitiful advantages, and insults me upon them without ceasing.” (William Godwin)

“Now, the wry Rosenbloom is dead
And his finical carriers tread”
(Wallace Stevens)

“Be it mine once more the maunderings to trace
Of the expounders’ self-directed race—
Their wire-drawn fancies, finically fine,
Of diligent vacuity the sign.”
(Ambrose Bierce)

“The knowledge enshrined here is most luminous; but the extravagance is wearying, an outrage to God and man, especially when set amidst so pious a town, where the most finical youth buys his fopperies in brown and gray…” (M.T. Anderson)

“Scrupulous to the last, finical to a fault, that’s Malone, all over.” (Samuel Beckett)

“Whereas, some merchant ships crossing each other’s wake in the mid-Atlantic, will oftentimes pass on without so much as a single word of recognition, mutually cutting each other on the high seas, like a brace of dandies in Broadway; and all the time indulging, perhaps, in finical criticism upon each other’s rig.” (Herman Melville)

“Now, mark you, I was devilish sharp set. I was in no mood to quibble about trifles: I was not, shall we say, in a finical mood.” (Philip Larkin)

“For about two-thirds of the poem the restraining, self-abnegating, completely attentive manners of the writing keep us alive to the surfaces of a world: the note is colloquial if tending towards the finical, the scenery is chaste, beloved and ancestral.” (Seamus Heaney)

“‘Yes, she does have something of that fougue,’ Andrei Antonovich muttered, not without pleasure, at the same time regretting terribly that this ignoramus should dare to express himself quite so freely about Yulia Mikhailovna…” (Fyodor Dostoevsky)

“Thus Sforza, cursed with a too fertile brain,
Lost by his wiles the power his wit did gain.
Henceforth their fougue must spend at lesser rate,
Than in its flames to wrap a nation’s fate.”
(John Dryden)

“The conscious agility, fougue, and precision which fill the performer become contagious and delight the spectator as well.” (George Santayana)

“About six weeks, however, after his mother’s death, Coryston’s natural fougue suggested to him that he was being trifled with.” (Mrs. Humphry Ward)

“On the extravagant Gothic fougue and fury of our native stage, characterised by its bad artistic form, and tumid, fantastic diction, classical influence of the right kind was purely salutary—granting, of course, the presence of original genius…” (Thomas Otway)