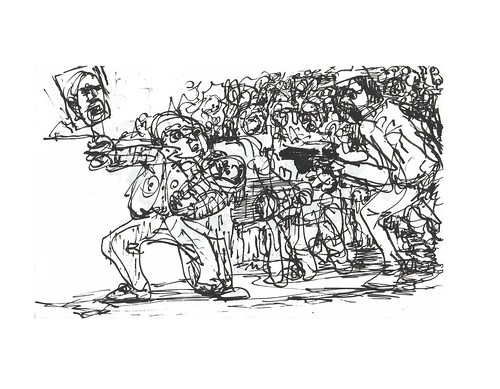 garboil / garboyle /GA(R)-boil/. noun. A tumult; a confusion; a commotion; an uproar; a hubbub; a hurlyburly. From Old Italian garbuglio (a tangle, a mess) < possibly from Latin bullīre (to boil).

“Far from the moiling crowd and garboyle of the world.” (The National Review)

“Yet others have disappeared, snatched from their places of refuge, to vanish into the prisons of the Exfernal Powers, denied trial, forbidden even to know the names of their accusers. Their minds may already have been destroyed by drugs and torture, their bodies melted into garboil.” (Margaret Atwood)

“…the most terrifying din and the principal uproar arises from the anguished howls of the devils, who, lying in wait in that confused garboil, receive chance blows from swords and suffer ruptures in the continuity of their substances, which are both aerial and invisible.” (Francois Rabelais)

“Then in ’82 there had been the Egyptian garboil I mentioned a moment ago; Joe Wolseley had asked for me point-blank, and with the press applauding and the Queen approving and Elspeth bursting into tears as I rogered her farewell, what the blazes could I do but fall in?” (George MacDonald Fraser)

“‘You have been grievously in error this day, sir. You have handed the throne of England to a malodorous Scotch garboil—or perchance a simpering Spaniard.’” (Rory Clements)

“…all Greece stood in marvellous garboil at that time, and the Athenians especially in great danger.” (Sir Thomas North)

“So much uncurbable, her garboils, Caesar,
Made out of her impatience…”
(William Shakespeare)

gobbledygook (gobbledegook) /GOB-əl-di-gook or GOB-əl-di-guuk/. noun. “The overinvolved, pompous talk of officialdom.” Pretentious verbiage. Unintelligible jargon. The first recorded use was in 1944 by U.S. Representative Maury Maverick who banned “gobbledygook language.” Maverick later noted he’d coined the word because it was onomatopoeic…it sounded like a turkey. See also: bafflegab.

“If a Super-Power wanted to contact man, it seems unlikely to me that it’d be all wrapped up in a lot of complicated gobbledegook. It would all be very clear indeed.” (Dallas McCord Reynolds)

“‘I am not at liberty to tell you what is wrong.’ It can’t be much fun having to parrot such gobbledygook. But who would want to work for a service where you earn promotion not for the number of people you let through but for the number you turn back?” (J.M. Coetzee)

“Ask a toad what beauty, great beauty, the to kalon is? He’ll answer that it’s his female toad, with her big round eyes starting out of her little head… . Ask philosophers, finally, and they’ll respond with gobbledygook; they have to have something in conformity with the archetype of the beautiful in its essence…” (Voltaire, trans. by P. Gay)

“A spider, a spiral, a one-eyed man”? What is that? A shopping list? A dance track? A line from a sodding haiku?
“Crispin, if I knew, I’d tell you, I swear.”
“Then it may just be random gobbledegook.” (David Mitchell)

“The multi-media self-consciousness of U2’s Achtung Baby/Zooropa phase, which simultaneously embraced and debunked the mythology and gobbledygook of rock stardom, capitalism, and power, and of which Bono’s white-faced, gold-lamé-suited, red-velvet-horned MacPhisto incarnation was the emblem, is what Wenders was criticizing.” (Salman Rushdie)

“But in reality the psychologist is simply tapping random and meaningless taps onto the lip, he doesn’t give a damn what he’s tapping, and the paralyzed, deaf-dumb-and-blind dentist gets enormously confused, there in the numb black, and he begins trying to move his upper lip, to communicate his confusion to his wife, to ask what the problem is, what’s this gobbledygook being tapped onto his lip, but the psychologist is meanwhile engaging the woman in clever conversation, and mild flirtation…” (David Foster Wallace)

grawlix /GRAW-lix/. noun. A series of typographic symbols used in place of an offensive word or phrase. Coined by Mort Walker in the satirical article “Let’s Get Down to Grawlixes” (which I can’t find online, thanks for $%@&#! nothing, Google) the term took off and has become a standard part of the lexicon of comics. As you can see for yourself, the grawlix originated as a mix of typographic and other symbols. See also: jarns, quimps, and nittles.

Sadly, most of Walker’s other awesome comic-related coinages failed the popularity test, including plewds (the flying sweat droplets that indicate hard work or stress), briffits (the clouds of dust that indicate the swift departure of a character), and squeans (the starbursts, circles and spirals that indicate dizziness or drunkenness).